Did Tumblr just fire the bullet that’s going to kill all our link juice?

There is so much speculation yet no one wants to test it to see for themselves….

The short version is Tumblr has now made all outbound links a meta refresh redirect. href=”http://t.umblr.com/redirect?z” + your URL.

There is still a way around it though so stay tuned.

For those of you who are new to this, I use Tumblr in a big way to build backlinks to my affiliate websites. There is a lot of panic going around right now considering there is a large group of people who do this.

So will this effect you?

Put it this way, I’ve seen some people quickly jump to conclusions and jump on the negative bandwagon saying Tumblr is now dead.

Yeah right, how do they even know that without testing it for themselves….. yeah they don’t.

The only thing you should be worried about is Tumblr flicking that no follow switch, we will leave that for another day if it happens.

You Have Nothing To Worry About… Yet

Right now you have nothing to worry about, juice is still flowing and if there is a loss it’s minimal.

The only thing you would need to take into consideration is the fact that a handful of other web 2.0 sites switched to no follow just over a month ago.

This is a simple fix though if Tumblr ever did do this, don’t rely on Tumblr as your main backlink source.

Change it up by adding other backlink sources. There are other expired web 2.0s you can buy or scrape to use.

I thrash Tumblrs because they are easy and I simply get lazy sometimes, I always back it up though with other links in case something does happen.

When the redirect took effect I was working on 5 new pages for one of my affiliate sites that needed some updated content.

These were perfect for the test so I used 3 of them.

For each post, I targeted 1 keyword and ended up finding an extra one that ranked really well. 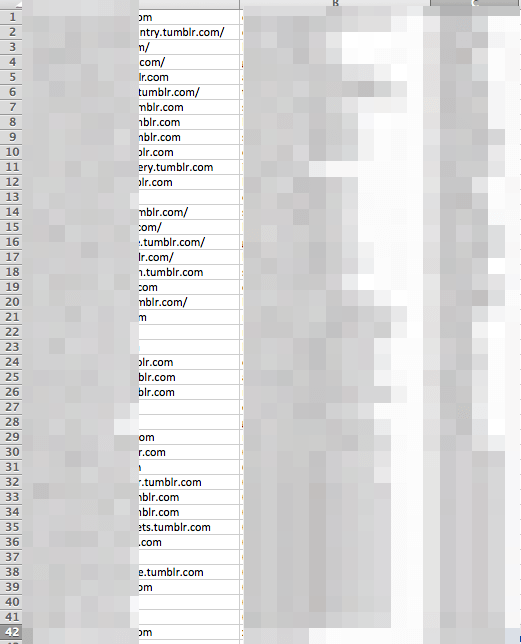 Usually, when using Tumblers I use them on keywords that have a competition of 30 or less…

I wasn’t expecting the good end results I had with these Tumblrs since my competition ranked from 35 to over 40.

When I post a link to Tumblr all I do is use an image and 30-40 words max with my anchor text in the middle.

I did 3 links per Tumblr, I was quite aggressive doing more than I usually do per day. So that’s 3 links to 3 different post per Tumblr.

If this was any other SEO campaign I would use other links for branding but since this was a Tumblr test my anchors went like this. (using just Tumblr) 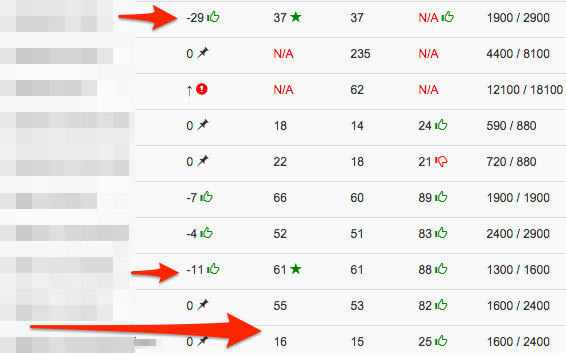 UPDATE! I think it’s safe to say that Tumblr is still rocking out the link juice based on some of these rises a week later.

Another Update to keep you guys in the loop

This one is about 4 days after the last update and it’s still going, Tumblr is definitely still passing juice. So in 13 days the main keyword is at 8 and the rest are climbing just from Tumblr’s.

Yesterday I started 15 document submissions for diversity but those won’t have any effect for another week or so.

I will have a full case study on these keywords once ranked and show you what else I do to push ranks.

These are the 3 specific pages and you can see they had some nice jumps, the bottom one is the best out of the 3 exact match keywords and look at the competition.

I don’t go by number’s though and this is just an indication, most of the top 10 are weak in on page SEO.

Then we have this banger that I wasn’t targeting. This word isn’t even on my page at all, however it’s one of the random keyword variations I used.

I found it with SEMRush then put it into my keyword tracker.

The domain used for this does have a DA (domains authority) of 18 so that would have helped slightly.

The real push came from the Tumblrs.

I don’t expect these top ranking to hold as they should drop slightly once the new backlinks have settled, this is normal. The 11 should settle at around 13-15 then I would hit it with stronger links.

Maybe they will have the reverse effect and Improve rankings even more.

Point is Tumbles still works and you have nothing to worry about right now.

Do my other sites still hold?

Yes and so should yours, all my other sites that I’ve used Tumblr’s linking to them haven’t dropped an inch. This page has over 80 Tumblers going to it for some nice buyer keywords.

If the Tumblr redirect really was an issue and killed off all the juice this would have dropped down a few at the very least.

How To Get Around The Redirect

There is a trick you can use however, I’m not sure how long it will last.

Put this code into the Tumblr description with your site and keyword.

There is no redirect code.

The Tumblr backlinks definitely still work, some of you sent me an e-mail worried that they don’t anymore because someone told you Tumblr is now useless.

Unless they have tested it or have some kind of proof that there is no way the redirect passes juice then don’t worry about it.

I have quite a few of sites that would have dropped slightly or even significantly if the juice really was blocked.

Are Tumblr backlinks really worth it? I’ll let these images do the talking. 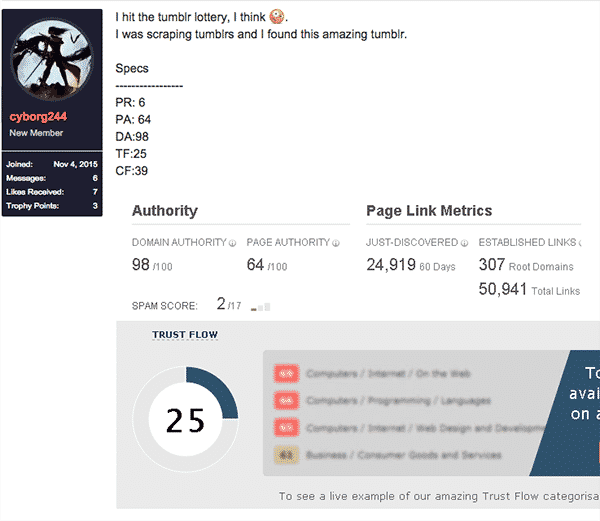 One of mine with some insane backlinks, over 100 referring domains and 40% of them from authority websites. 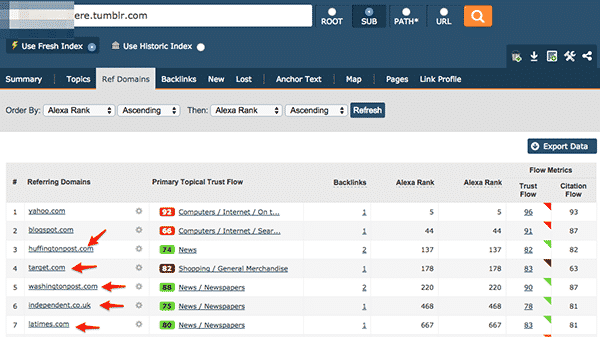